Transportation Between Taipei And Hualien (Taroko)

It is also asked about the transportation between Taipei and Hualien. For sure, railway is the most common transportation.But there are some useful tips and alternatives.

Before reading the following material, please cleasify you itinerary. The solution to others may not be the soulution to your question. In the last 3 years, there are some update for the transportation between Taipei & Hualien.  I hope the summary bellow can help you: 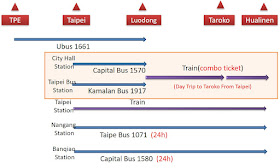 If you want to go to Hualien from Taiwan Taoyuan Internation Airport(TPE), you can take UBus1661 to Luodong and take train to Hualien. You don't need to transfer at Taipei. If the train tikcets to Hualien and you don't want to take bus more than 4 hours, try combo tickets.( For timetable, real-time GPS of bus, please read Bus App)


Since it is difficult to book the train between Taipei and Hualien for most of time, there is another alternative which you don't need to worry about the tickets. If you check google maps, you will find the railway goes through the north east corner of Taiwan. But there is a freeway providing a short cut. The length of railway is 40 KM more than the freeway alternative!!. And most important of all, there is no local train between Taipei and Hualien but you can take local train by this alternative. Another advantage for the combination is that the local train stop at Xincheng (Taroko) Raiway Station and you can take the bus the Taroko Gorge directly.


Taiwan Railways Administration and Bus companies provide the combo ticket. The combo ticket combines shuttle bus, between Taipei and Luodong, and train, between Luodong and Hualien. The fare is about 50% off comparing to Tze-Chiang Limited Express, and is about 2 and half an hour including the waiting time in Luodong.

<From Hualien or Xincheng(Taroko) to Taipei>
Buy the combo ticket at the railway station counter and choice your terminal(Taipei Bus Station or Taipei City Hall Station). You can also decide to take the train of other class.
Go to Luodong Bus Station and reserve a seat at the bus ticket window.

<From Taipei to Hualien or Xincheng(Taroko)>
Buy the combo ticket at Taipei Bus Station or Taipei City Hall Station and reserve your bus seat.
Go to Luodong Railway Station. If you want to upgrade to another class, please exchange your ticket at the ticket window. If you want to take the local train, just go to the platform. You can check the time table of the train at the hall of the railway station.


Taroko & Puyuma do not stop at Xincheng(Taorko) Station, 20KM north of Hualien Station. You have take train or bus back to Taroko Gorge if you want to visit Taroko Gorge. It means you waste more than 1 hour in the 40KM, including waiting time. If you use the combo ticket, you can get off or get on at Xincheng(Taorko) Station and take Taiwan Tourist Shuttle to the Gorge. In fact, it is not rush at all to visit Taroko Gorge within one day from Taipei by the Combo Ticket.


Further Information:
<About the combo ticket>
Train:
Please choice Hualien area if you want to check the time table of Xincheng(Taroko) Railway Station in the railway website. Luodong is in the area of Yilan.
Bus:
The shuttle bus between Taipei and Luodong is about one hour if the traffic condition is good. Pleas choice the direct bus.

<About the shuttle bus in Taroko>

Hualien Bus provide the service between Hualien Station and Tienxiang. The following is the time table of the shuttle bus. You can make a phone call  (03)8338146 to confirm whether the shuttle bus (Hualien Bus)is available since there could be traffic condition. In additional to pay cash or by easycard every time when bording, you can  purchase a one-day ticket(NTD 250) or 2-day Ticket(NTD 400) at the start point- Hulaien train station or from the bus driver (Only Hualien Bus sells the ticket).

1.Only 120 tickets available for each Puyuma/Taroko train.
2.Only sold for the day. You cannot book in advance. You need to buy tickets at the ticket windows in the train station.
3.Puyuma/Taroko sways seriously. It is hard to keep balance if you stand in the train. You need to sit on the aisle against the wall.

Be noted: You need to buy tickets in advance, no matter having seat or not, if you take Puyuma/Taroko Express.


Itinerary Tips
If you want to use combo ticket and Hualien Bus that go through Taroko Gorge, please arrive MRT Taipei City Hall Station/ Taipei Bus Station before 8am. The itinerary can be planed,as below :

You can leave your luggage at Xincheng(Taorko) Station or Hualien Station. The railway stations provide the luggage storage service. It costs of one day storage is around NTD 70~30.   Be noted that the timetable of train and shuttle may change. Please confirm the timetable again when planning your itinerary.

Don't worry about the bus
Some may wonder if they can book the combo ticket in advance. Being a backpacker, I know all travelers want to minimize the uncertainty in their trip. Although the combo ticket is sold on spot only, there any problem to book the bus seat for some
reasons. There are 4 bus companies, including Capital Bus and Kamalan Bus, provide the transportation between Taipei and Yilan/Luodng with about 800 shuttle buses, about 24,000 seats, in one way per day. The bus interval is about 10~15 minutes. When there are too people waiting in line, the bus companies will increase the bus frequency, which won't shown in the table list.
Because of the high frequency, in my experience, the waiting time ranges from 5~45 minutes. The That's why I estimate 3 hour from Taipei to Hualine, including waiting time. The rush hour from Taipei to Yilan/Luodong is Friday evening. And the rush hour from Yilan/Luodong is Sunday evening.You can go to the bus office(ground floor in MRT Taipei City Hall Station and 3rd floor in Taipei Bus Station) first, and then go to toilet or convenient store.

Shuttle bus in Taroko Gorge
In additional to combo tickets, another common question is the transportation in Taroko Gorge. Do you need a hop on/off day ticket(day pass)? I conclude at the beginning: Use easycard/ipass instead (remember to top up at least NTD 500) since there are 2 bus companies.
Hualien Bus(Taiwan Trip/ 1133A)
Hualien Bus is the most well know bus company in Taroko. It provide 1-day pass and 2-day pass. You can also use easycard/ipass. The major line in Taroko is 1133A. There are also some other less frequent bus lines( line 1126,1141). You can use day pass at all bus line in Taroko with its day pass.

Taroko bus is a new bus company and is less known. Taroko Bus does not provide day pass but accept easycard/ipass. Please be noted that 302 only runs between Xincheng(Taroko) Train Station and Tianxiang. 302 does not operate to Hualien Station and Qixingtan. You can download the latest timetable from the official website of Taroko National Park. 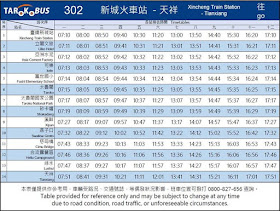 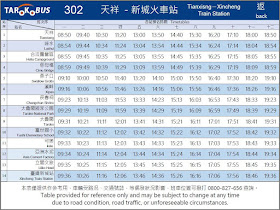